"Film editing is not a technical process, it's a creative one, in which the editor helps the director fulfill his or her cinematic vision." — John Travers

I meant to get the following write-up out in February for those who did not go to the Los Angeles memorial – my apologies.

On January 20 Alice and I flew out to take care of some of John’s affairs and go to the LA memorial service – which had been expertly arranged by David Rickett at the famous Egyptian Theater on Hollywood Blvd. Among other UB attending were Steve Cioffi, Evans Brassfield, Karen Rainey, Alex Leyton, Paris Patton, and Mark Kalbfeld – along with many of John’s LA friends like musician Boris Worister and editors Kent Hagen and Bob Murawski (who won an Oscar for Hurt Locker).

I hadn’t seen most of the LA crowd since the 1990’s – everyone looked good  including Evans and Karen who seemed to have aged only a couple of years. LA itself hadn’t changed – except that during the few days we were there it was mostly rain and wind instead of the usual sun.

John and Kent Hagen shared an editing office directly across the street from the Egyptian in a classic 1920’s building – now separated from the roughness of the Blvd. by a video-card entry gate. The walls of John’s office were covered with dozens of autographed actress and celeb photos he had collected – and of course movie posters.

John’s small apartment – which he had for over 20 years – was in a Japanese style complex next to the Yamashiro restaurant on the hill behind Hollywood Blvd. and the Chinese Theater. The deck looked out over the Blvd. and all of Los Angeles – you could see Griffith Observatory and the Dolby Academy theater.

The service at the Egyptian was held in the smaller “Steven Spielberg Theater”. The Academy print of “Jenny” was shown – which also included a 16mm Academy interview with a very young John Travers after he won the Student Award in 1986. Thin and in a suit with short hair and looking very determined, John talks about making the movie and special effects. 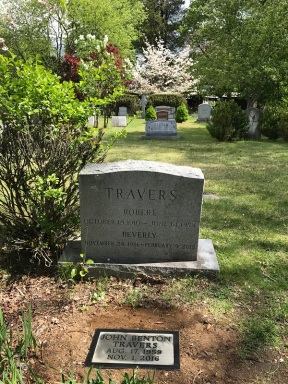 Many moving words and stories were told. David was not alone in saying he had feelings of anger along with sadness – also that there were plans to set up an educational fund and that “this is not the end of John Travers”.  Steve Cioffi  – always a great speaker – ended by recalling one of his last poolside chats with John. He had asked John what he thought about his future and John took out a paper with his hospital cardio reading.

Afterward we all went to the famous Pig and Whistle bar next to the Egyptian. There were many beers and more stories about John Travers.

In early May the marker for John was placed at his family plot where his Mother and Father are – at the Willowbrook Cemetery in Westport.